Second half of the trip

I started biking around 1500 and did not know how far I would get. The bike trail was nice but oftentimes with roads cutting into the trail. Eventually, I took a wrong turn and drove through some nasty gravel where I got my first flat since Dryden, Ontario. I was very used to dealing with flats and after a few minutes was ready to pump up my spare when I realized my pump is broken! It was a great pump from MEC (Filzer Mini-Zee2 Pump), but its head that attaches to the valve somehow had unscrewed and was lost forever. I had no pump and was stuck. The nearest Canadian tire was 5km away (could be waaaaay worse). Thankfully, a senior couple of road bike tourists were biking to Oshawa back home from their trip from Ottawa. They let me borrow their pump to fix my bike. I then went to Canadian tire and got a emergency spare bike pump until I got my MEC air pump replaced at the next MEC.

Eventually, I made it to the campground. I got there at 2030, set up my tent and ate dinner in the bathroom to avoid the mosquitoes. I was charged 35 dollars. Ontario can get pricey for camping. There was another bike tent set up - the person had already retired for the night and I only saw him the next day. 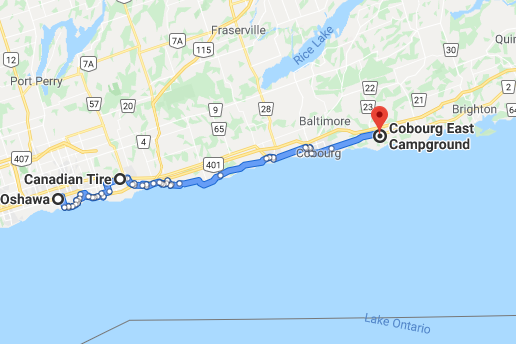