Today I slept in. My campground neighbours were busy packing up next door and I didn't want to join in on the rush so I napped until they left.

I biked to Charlottetown where I met a guy. We talked a bit about my travels and he offered for me to the stay for the night - but I could not as I needed to rush ahead. I asked where I could find a scrap yard as I did not expect to be able to find a PEI license plate on the ground since the province is so small - he told me where to go where I got a plate (Yes! my collection is almost complete).

Overall, I was not too impressed by the town. I didn't spend too much time there - it seemed kind of empty to me. Someone I met later said they liked it so perhaps I missed the local gems. It was definitely touristy but didn't catch my eye.

The country was way more interesting than the town to me. On the way to the ferry I took the trans can and then took the 23 south to the ferry. I saw a lot of cars pass me with many license plates from Ontario and Quebec. The ride was nice and hilly.

After the ferry it very beautiful and wild. A new province - Nova Scotia! I practised saying Nova Scotia in my best Nova Scotia accent - (based on how a friend of mine speaks). Lots of hills and trees. I keep comparing everything back to Northern Ontario.... I don't know why. Northern Ontario is now the universal measure of climate - official from now on - you heard it here first. I guess nature does not vary that much after spending so much time on the road. It all starts to blend and morph in your mind eventually as the memory blurs...if you squint it definitely looks the same and memory blur is a form of squinting.

I spent the evening listening to music and podcasts and enjoyed the hard climbs. Had a dog chase me from the opposite side of the road's front lawn. This time it was a pitbull - my heart was beating so hard I thought I was about to have to fight a dog. How do you fight a dog? The dog ran 10 meters onto the road and was 10 meters away from me as the owner thankfully called the dog back...nightmare fuel.

My trip was finishing up quickly and for this day and until the end part of the ride it all felt a little bit like a victory lap.

The campground was pricey and in real dense wood. I got there when it was late - ate a bunch of sardine cans and went to sleep as soon as I could. 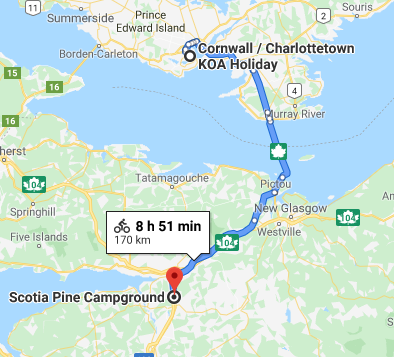