Finally out of Ontario

I finally left Ontario - the longest province - and reached Montreal. As soon as I entered Quebec I noticed a lot more bicyclists. Quebec is the province of bicyclists (I knew this before since most of the bicyclists I have encountered on my trip have been from Quebec province).

The province of Quebec has a lot of bike routes and paths and if there is a province that I would focus on for a mini bike trip then it would be Quebec as it is very bicyclist friendly and beautiful.

Today I biked along the 338 highway and then later along a bike path parallel to a small river. Eventually the path ended and the 338 veered north towards the bridges leading into Montreal (never knew it was on an island before today). In this area I met a group of professional cyclists that were biking fast towards Montreal. I joined their convoy and kept behind them.

One of the bicyclists in the convoy was Germaine. We started talking and he learned that I was biking cross Canada. Germaine was in his 70s and had previously biked across Canada and was a big fan of bike touring. He invited me to stay at his place for the night.

I hung out with Germaine and his family. He showed me his bike collection. He had a Giant bike that he used to tour cross Canada and other places around the world. The bike had clocked around 70000. In addition, he was restoring racing bikes from the 60s. He was impressed by my Canadian Tire bike.

In the afternoon, I left my stuff at Germaine's and biked out to visit Montreal downtown. A 30-40km ride one way. I biked along the southern shore of the island on the road. There was a bike path there as well, but I stuck to the road as the speed limit was 30km/h and I was peaking at 40km/h most of the time and passing all the cars. The neighbourhood was beautiful, but this is probably because shoreline properties are expensive.

I was biking fast and at times aggressive as I wanted to be seen. At one point a driver was seeking to make a left turn onto the road I was on while I had priority. With no one behind me, I wanted to make sure I was seen so I moved towards the middle of the lane instead of the side for a short bit. This forced the driver to wait further on his left turn and by the time he merged he had pulled down his window and was swearing at me and even tried to push me off the road with his car. Not a good example of defensive riding on my part. Today's evening bike ride was all adrenaline and fast speed. My legs were a little sore for the next couple of days despite me biking all the way from Vancouver.

The city was of Montreal was very beautiful and I was very very impressed. There were many bike paths and the city seemed bicycle friendly. Lots of people out in the city enjoying the weather and the bike paths. The downtown area of Montreal reminded me of Toronto - the colour schemes and design of some buildings. However, Montreal did not seem as crowded as Toronto was and had more historic buildings and statues.

I couldn't stay in Montreal downtown and explore for too long as I had another 40km to bike back to Germaine's. Biking in the dark on the bike paths is very beautiful and interesting. This was one of my most favourite parts of the ride.

I had a wonderful shower and food at Germaine's. We talked about travel and life. Germaine was older and very healthy. He crossed Canada by bike in his 60s. He biked a lot, but he was noticing how we was getting weaker. He still could crush on the flat ground, but hills were getting harder and harder and his muscles smaller. Throughout the conversation he mentioned a few times 'if I was your age' and then the thought would trail off and be left incomplete. Does everyone get these thoughts at the end of the journey? I think yes as nostalgia seems inevitable unless you lose your memory. However, can the thoughts be minimized or positively transformed?

I was very grateful for hospitality. It was very kind and inspiring. Thank you Germaine! 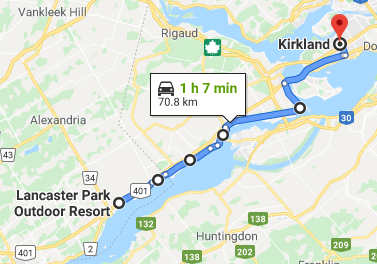